Symbols of the French Republic

One of the national emblems of France, the Coq Gaulois (the Gallic Rooster) decorated French flags during the Revolution. It is the symbol of the French people because of the play on words of the Latin gallus meaning Gaul and gallus meaning coq, or rooster.

The rooster has been used as an ornament on church bell towers in France since the early Middle Ages, but at that time it was probably used to symbolize vigilance as roosters are known to crow at the expectation of the sunrise. The Gallic Rooster has been used for centuries by folk artists as a decorative motif on ceramics or carved and veneered wooden furniture.

The rooster played an important role as the revolutionary symbol, but it would become an official emblem under the July Monarchy and the Second Republic when it was seen on the pole of regiments’ flags. In 1830, the "Gallic Rooster" replaced the fleur-de-lis as the national emblem, and it was again discarded by Napoleon III.

Since 1848, the rooster has been seen on the seal of the Republic (Liberty is seated on a rudder decorated by a rooster) ; it was used from 1899 as a motif on gold 20 franc coins and it occasionally appears on stamps.

It is the emblem of French sports teams in international competitions.

The Seal of State

The official seal of the French Republic was created in 1848. It depicts a seated figure of Liberty brandishing a fasces of lictor. Near her, there is an urn struck with the letters "SU" (for universal suffrage). At her feet, stands a Gaulish rooster.

The reverse side of the seal is decorated with a wreath made of a vine branch, stalks of wheat and a laurel branch. The center bears the inscription "Au nom du peuple français" (In the name of the French people). The motto of the Republic follows the circumference of the seal : "Liberté, Egalité, Fraternité" (Liberty, Equality, Fraternity). This seal is affixed to the official text of the Constitution of the Fifth Republic, proclaimed in 1958 and kept in the National Archives in Paris.

The Fasces of Lictor

The fasces of lictor is a bundle of rods with a projecting axe-blade which was a symbol of authority and unity in Ancient Rome. For example, magistrates when entering a court had a bundle of rods carried before them. On occasion, they were used to give public floggings.

During the First Republic, artists used it to symbolize the union of the 83 departments making up France at that time. It was surmounted either by an axe, or by the pike of the revolutionary divisions, or by the Phrygian cap.

A legacy of the Age of Enlightenment, the motto "Liberté, Egalité, Fraternité" first appeared during the French Revolution. Although it was often called into question, it finally established itself under the Third Republic. It was written into the 1958 Constitution and is part nowadays of the French national heritage.

Linked by Fénelon at the end of the 17th century, the notions of liberty, equality and fraternity became more widespread during the Age of Enlightenment.

From 1793 onwards, Parisians, soon to be imitated by the inhabitants of other cities, painted the following words on the façades of their houses : "Unity, indivisibility of the Republic ; liberty, equality or death". But they were soon asked to erase the phrase’s final part as it was too closely associated with the Terror…

This motto fell into disuse under the Empire, like many revolutionary symbols. It reappeared during the Revolution of 1848 marked with a religious dimension : priests celebrated the "Christ-Fraternité" and blessed the trees of liberty that were planted at the time. When the Constitution of 1848 was drafted, the motto "Liberty, Equality, Fraternity" was defined as a "principle" of the Republic.

Discarded under the Second Empire, this motto finally established itself under the Third Republic, although some people still objected to it, including partisans of the Republic : solidarity was sometimes preferred to equality which implies a levelling of society, and the Christian connotation of fraternity was not accepted by everyone.

This motto was inscribed again on the pediments of public buildings on the occasion of the celebration of July 14, 1880. It appears in the constitutions of 1946 and 1958 and is today an integral part of our national heritage. It is found on items used by the general public such as coins and postage stamps.

Marianne is present everywhere in France and holds a place of honor in town halls and law courts. She symbolizes the "Triumph of the Republic", a bronze sculpture overlooking Place de la Nation in Paris. Her profile stands out on the official seal of the country. It is engraved on coins and drawn on stamps and banknotes. Marianne is considered as the most prominent depiction of the French Republic.

But who is this woman, presented, by the artist Daumier, as a mother nursing two children, or, by the sculptor Rude, as an angry warrior voicing the Marseillaise on the Arc de Triomphe, or, by the painter Delacroix, as representing Liberty leading the people on the barricades, and where does she come from ? One thing is certain. Her image never leaves the French indifferent. In the last two wars, certain people worshipped her just like a saint. Others, who were anti-Republican, often dragged her name through the mud.

Why is it a woman and not a man who represents the Republic ? One could find the answer to this question in the traditions and mentality of the French, suggests the historian Maurice Agulhon, who set out on a real police investigation to discover the origins of Marianne which have remainded mysterious.

To begin with, why the name ? Why Marianne rather than Françoise, Mireille or Madeleine ? Some people believed it came from the name of the Jesuit Mariana, the 16th century theoretician. Others thought it was the image of the wife of the politician Jean Reubell, basing their belief on an old date.

According to the story, it appears that in 1797 when seeking a pleasant name of the Republic, Barras, one of the members of the Directoire, during an evening spent at Reubell’s, asked his hostess’s name ; "Marie-Anne," she replied. "Perfect," Barras exclaimed. "It is a short and simple name which befits the Republic just as much as yourself, Madame."

This anecdote contradicts a recent discovery which established that the fist written mention of the name of Marianne to designate the Republic appeared in October 1792 in Puylaurens in the Tarn department near Toulouse. At that time, people used to sing a song in the Provençal dialect by the poet Guillaume Lavabre : "La guérison de Marianne" (Marianne’s recovery)

At that time the account made of their exploits by the Revolutionaries often contained a reference to a certain Marianne wearing a Phrygian cap (or Marie-Anne, a popular name in the French countryside then). This pretty girl aroused the "sans-culottes" and looked after those wounded in the many battles and clashes across the country.

The name of Marianne also appears to be connected with several Republican secret societies. During the Second Empire, one of them, whose members had sworn to overthrow the régime, had taken her name. Today, Marianne remains as attractive as ever. She has even grown younger. As for the official busts, during the last thirty years she has taken on the features of Brigitte Bardot, Catherine Deneuve and, currently, those of the famous French fashion models, Inès de la Fressange and Laeticia Casta.

In 2002, a new Marianne was born. She does not have the features of a famous French woman but those of an anonymous " beurette"( young woman of North African descent), discovered by a scouting agent looking for a model who would symbolize a modern, multiethnic France.

Bleu-white-red, Marianne, Liberté-Egalité-Fraternité, the Republic : these powerful symbols represent France and its values. They have now been combined in a new "identifier" created by the French government under the aegis of the French Government Information Service (SIG) and the public relations officials in the principal ministries. As such, it will appear on all material - brochures, internal and external publications, publicity campaings, letter headings, business cards…- emanating from the government, starting with the various ministries (which will be able to continue using their own logo) and the Préfectures, decentralised government departments in the regions and Départements.

The first objective targeted by this design is to unify government public relations. But it is also designed to give a more accessible image to a State currently seen as abstract, remote and archaic, all the more essential in that French citizens express high expectations of the State. The logo chosen, "federating and mobilising, offers security and optimism, not forgetting patriotic pride."

This data was gathered from numerous interviews and consultations conducted by Sofres (the French survey institute) in January 1999, with the general public and public servants. It emerged that the French are deeply committed to the fundamental values of the Republic and expect an impartial and efficient State to be the guarantor of the principles of liberty, equality and fraternity. 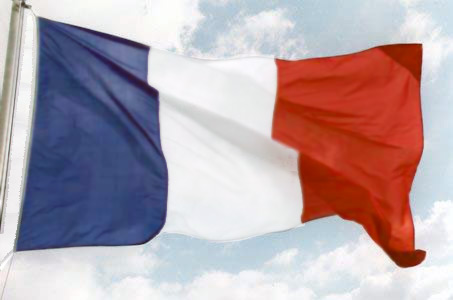 The "tricolor" (three-color) flag is an emblem of the Fifth Republic. It had its origins in the union, at the time of the French Revolution, of the colours of the King (white) and the City of Paris (blue and red).

Today, the "tricolor" flies over all public buildings. It is flown at most official ceremonies, both civil and military.

In the early days of the French Revolution, the three colors were initially brought together in the form of a cockade. In July 1789, just before the taking of the Bastille, Paris was in a state of high agitation. A militia was formed ; its distinctive sign was a two-color cockade made up of the ancient colors of Paris, blue and red. On July 17, Louis XVI came to Paris to recognize the new National Guard, sporting the blue and red cockade, to which the Commander of the Guard, Lafayette, it appears, had added the royal white.

The law of 27 pluviôse, Year II (February 15, 1794), established the "tricolor" as the national flag. At the recommendation of the painter David, the law stipulated that the blue should be flown nearest the flagstaff.

Throughout the 19th century, the blue of the legitimist royalists contended with the three colours inherited from the Revolution. The white flag was re-introduced under the Restoration, but Louis-Philippe reinstated the "tricolor," surmounting it with the Gallic rooster.

During the Revolution of 1848, the provisional Government adopted the "tricolor," but the people on the barricades brandished a red flag to signal their revolt.

Under the Third Republic, a consensus gradually emerged around the three colours. From 1880 onwards, the presentation of the colors to the armed forces each July 14 came to be a moment of high patriotic fervour.

While the Comte de Chambord, pretender to the French throne, never accepted the "tricolor," the royalists ended up rallying round the national flag at the time of the First World War.

The constitutions of 1946 and 1958 (article 2) instituted the "blue, white and red" flag as the national emblem of the Republic.

Today, the French flag can be seen on all public buildings. It is flown on the occasion of national commemorations, and it is honored according to a very precisely-defined ceremony. The French flag frequently serves as a backdrop when the French President addresses the public. Depending on the circumstances, it may be accompanied by the European flag or the flag of another country.